Improving the attacking potential and finishing of the chances created

Already a fan favorite with his impeccable physical build and strong finishing ability, Luka Jović is a 21-year-old player who boasted 27 goals for Eintracht last season and it was not a coincidence. Statistically, the new Real Madrid forward had 3.3 shots on goal per game for the German club. He caught scouts’ eye for his ability to find chances, “strong’ weak foot and his smart movement inside the box. Jović proved himself not only in the domestic league but also in the UEFA Europa League. His numbers speak for themselves:

Impressive? Definitely. But in the context of Jović’s transfer to Real Madrid, there are a few reasonable concerns when it comes to his development as a player within the team, despite all these solid figures.

Firstly, the Serbian striker has so far only had ­­one confident season and, conceivably, is a cat in a bag. As much as we all would love to see another success story, there have been plenty of one season strikers in football history who, prior to their transfer to a new club, had enjoyed a head-spinning season and then failed to live up to the expectation. Lucas Pérez totaling his career-best 17 goals for Deportivo La Coruña and then signing for Arsenal is the one that comes to mind. Or even Finnbogasson to Real Sociedad from Heerenveen in the season 2013/2014 with his 24 goals in the Eredivisie. Each of them had their reasons for failure but it does not eliminate the fact that for every successful player there is one that failed to cement their starting spot.

Real Madrid is the team where immediate results are expected. It is much easier for an established star player like Eden Hazard who, due to his undeniable talent, is capable of adapting to any system or the lack of thereof. For a young and developing talent such as Jović, many factors should come in place for them to establish a career at Madrid.

Secondly, even based on statistical indicators, Jović is a dependent-in-the-penalty-area forward. Of course, sometimes Luka can create a moment for himself or combine with others, but you should not expect him to play similarly to Suarez or even Benzema, he has a very different profile. Surely, comparable to Jović forwards do exist and prosper in the top European leagues, the problem is they sometimes do not succeed in Spain. For many years, Madrid has been playing without the traditional nine, which requires increased attention from the teammates. It is very unlikely that the entire Madrid squad will look to pass to Jovic throughout the game, more likely they will expect Jović to take on other responsibilities on top of scoring goals. The positive thing here is the age of the Serb, so there is time for him to master other components of the game.

Thirdly, there is an understanding that during his first season Jović will not be a starter for Madrid. This does present a certain concern. As with many strikers, Jović needs to receive consistent minutes and build his confidence in front of the goal as well as build some on-pitch understanding with teammates. From what we have observed so far, the Serb will receive playing time either due to rotation or when Zidane decides to switch to a 4-3-1-2 diamond with two forwards or a 4-4-2 similar to the one the Frenchman started in the game against Villareal. Either of the schemes will require certain adaptation from both strikers, who have their own strengths. Jović is only similar to Benzema position-wise, however, he is a pure nine who, similarly to Cristiano Ronaldo in his last few seasons with Real Madrid, opens up on the offside line and looks for his chances inside the box. He is very good at losing his man and choosing the perfect moment to strike, can change his composure rather quickly to finish chances, and has superior heading accuracy. 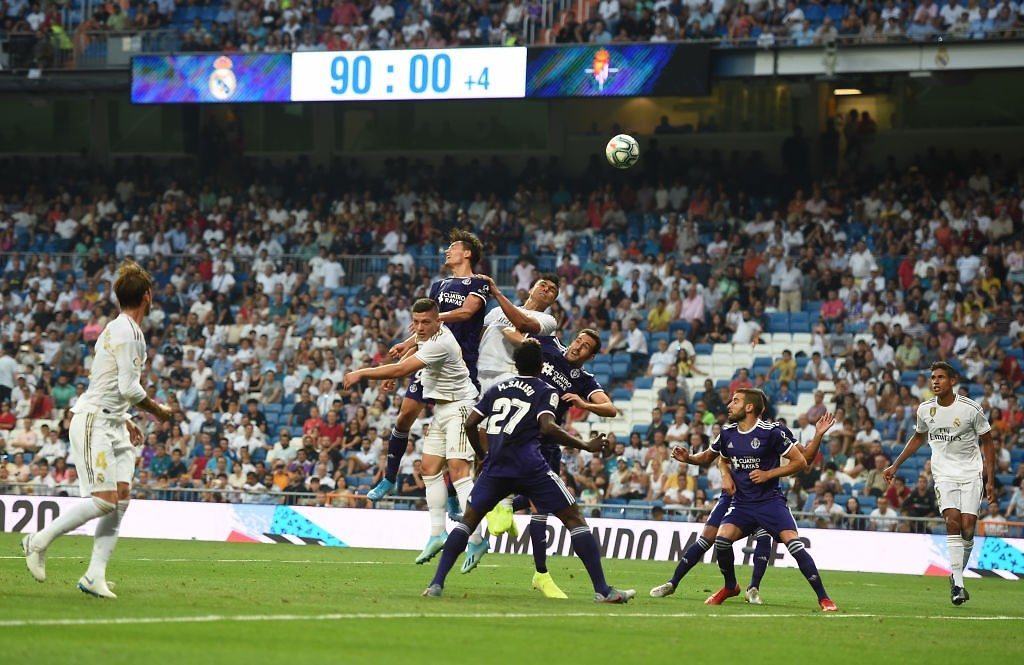 Jović’s success during his first season at Madrid should not be measured by a mere number of goals he scores. Much more important is how the striker performs after he enters the game as a substitute, how he learns and trains, and, most importantly how he changes his playing style and adapts to La Liga. In his first season, Luka needs to convince Zidane that he is capable of playing for Real Madrid and bringing something new to the team.

Brazilian Rodrygo Goes has become the second most expensive transfer sale in Santos Futebol Clube’s history. The youngster made debut for his boyhood club’s first team at the age of sixteen and managed to appear in 80 games for the team in all competitions in a year and a half, becoming the youngest Santos’ footballer to overcome the 50-game mark.

Rodrygo has all the components of the modern prodigy starter pack: speed, dribbling, positional awareness, and adaptability. He is often compared to another young Brazilian talent – Vinícius Jr. While Vinicius may be more gifted in regards to his pace, acceleration, and dribbling, Rodrygo has better positional awareness, ability to deliver the end product and versatility within the forward line. Rodrigo predominantly plays on the left flank which means he is competing for a starting spot with another new signing Eden Hazard and Vinicius Jr. However, Rodrigo can also play on the opposite flank and upfront (he practiced this with the national team). 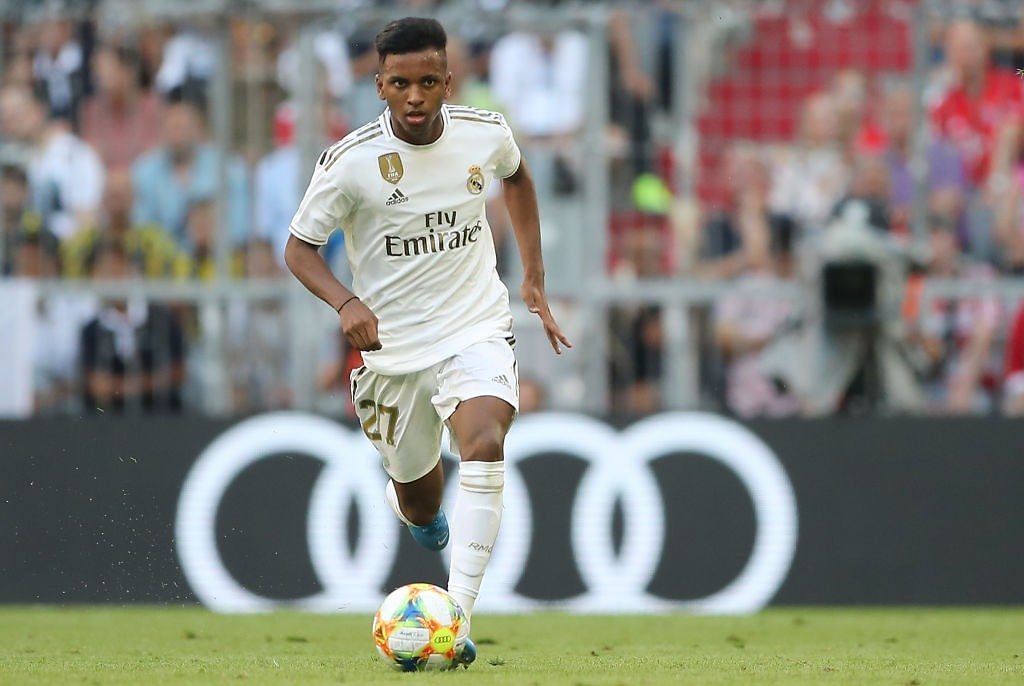 The manager of the Brazil national team Tite has summarized Rodrygo’s strongest qualities: “He can go through between the lines with ease, he knows how to protect the ball, he can change directions without anybody noticing, and he always comes out dribbling when he gets a little space to do so. His decision-making skills are truly incredible. His mental game is that of a 25-year old, he plays collective football. His only problem is that he still lacks physical strength, something that Vinicius does have but he is still kind of selfish with the ball.”

It is too early to talk about the prospects of the Brazilian within the team but it is clear that Rodrygo a promising talent whose career trajectory will be interesting to follow. He has been registered with the Champions League squad and we might see him make occasional appearances with the first team.

As a final note, it is reasonable to question whether the new additions to Real Madrid’s attack are potent enough to make an impact on the team’s offensive dynamics. It is not a secret that Los Blancos have been looking toothless in the scoring department and not only after selling their main goleador Ronaldo, but also with the departures of the “power substitutes”, Gareth Bale’s multiple injuries, and Benzema’s low goal-scoring output bar last season.

It is safe to say Madrid’s attacking roaster seems competitive enough on paper. The club’s management has attempted to address the following contributors to the stifled attacking performances: the aging attacking line, lack of offensive playmakers or progressive dribblers that improve attack’s verticality, lack of inventiveness in the final third, poor finishing. Eden Hazard is seemingly the solution to the bulk of these issues (more about him later on) with Jović possibly improving finishing and Rodrygo being one for the future. It is, however, unlikely that the Belgian will be able to fully revitalize Madrid’s attack. He will need extra support in the form of another elite dribbler or a player with enough of a pass speed and vision such as an in-form James Rodriguez.

Coming up next: Adding creativity to the midfield 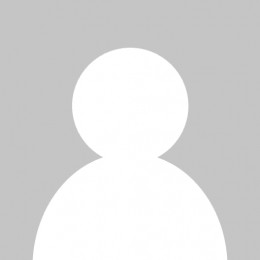